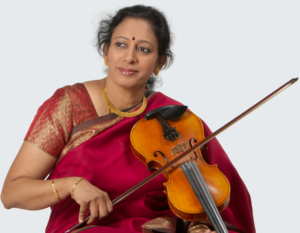 Anuradha Sridhar is the daughter and disciple of the violin maestro Lalgudi Srimathi Brahmanandam, the reputed sister and violin duo partner of violin virtuoso Lalgudi G. Jayaraman. Groomed in a milieu that traces its roots back to the most significant Carnatic composer of all time, Saint Thyagaraja, the strains of music have been handed down in Anuradha’s family like a precious heirloom, from generation to generation.  Her grandfather, Lalgudi Gopala Iyer, was an innovative teacher and a versatile musician.  Her brother Shriram Brahmanandam is a versatile mridangam artist.

Among the South Indian classical music aficionados of the San Francisco Bay Area, Anuradha is synonymous with purity, rigor and refinement.

As a tireless teacher, performer and ambassador for Carnatic music, Anuradha envisioned her music school, Trinity Center for Music, a few months after she moved to the Bay Area in 1989. 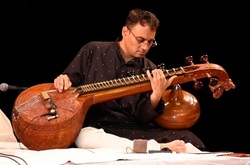 Accomplished veena artiste, Srikanth Chary began his veena training at the age of six in Mumbai under Vidwan Devakottai Sri Narayana Iyengar.  He later studied under the auspices of Shanmukhananda Sabha from Smt. Kalyani Sharma.  At the age of eight, Srikanth was presented the first prize in a music competition by the music doyen Smt. M. S. Subbulakshmi.

After moving to the United States, Srikanth had the opportunity to study music from the famed violinist Kum. A. Kanyakumari.  This opportunity awakened in Srikanth a keen love for music that he has been pursuing ever since.

From the early 1980s Srikanth received advanced music training from the music Maestro Padmabhushan Lalgudi G. Jayaraman. Sri Jayaraman's bani (musical style) is well known for its purity of sound and rhythm, its emphasis on tonal perfection, and its sparkling creativity in manodharama sangitam (improvisational music).

Srikanth has adapted this captivating style to the veena, and reformed this instrument to a new melodic medium while preserving the traditional purity of Carnatic music.  He has delighted audiences all over with his scintillating music. 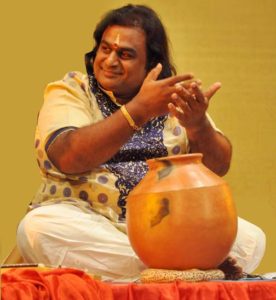 A Prime student of Sri. Vikku Vinayakram and Sri. Subash Chandran and acknowledged as one of India’s top most percussionists, Dr. Karthick’s performing career credits reads like a who’s who of top classical and contemporary Indian artists.  He has enthralled audiences all over the globe, performing at prestigious venues.

Dr. Karthick also leads the Heartbeat ensemble.  He has received many titles and awards.  He has composed many kritis, tillanas and varnams.

Additionally, Dr. Karthick has performed with many music directors like Ilayaraja, A. R. Rahman, Harris Jayaraj and many others.  He has performed lot of contemporary music involving Jazz, Rock, Classical and World Music.

Dr. Karthick holds a M.A, M.Phil, and PhD in Sanskrit and also has M.A. in Indian Music from the University of Madras.  All these facets have earned Karthick a special place in the hearts of music lovers.