The Event: my mridangam arangetram

On November 6, 2016, I got to accompany a veena-violin duet by two of Bay Area’s best musicians - Vidwan Sri Srikanth Chary (veena) and Vidushi Smt. Anuradha Sridhar (violin).  Please click here to see the invitation to my (mridangam) arangetram.

I know for a mridangam arangetram like mine, the main artist is typically a male vocalist.  However, after accompanying a couple of vainikas and violinists at the monthly CCC events in Milpitas, I thought it would be more interesting and challenging to have a vainika and violinist as the main artists for my (mridangam) arangetram.  When I suggested this to my guru and my parents, they were all supportive of this idea.

Both Anu aunty and Srikanth uncle were taught music in the Lalgudi style.  My parents and I are huge fans of this style.  Fortunately for me, we have two of the best artists in this style right here in our neck of the woods - the greater San Francisco Bay Area.  Please take a few minutes to read their bios in the Artists page.

Also, as luck would have it, Vidwan Dr. S. Karthick was touring the United States during these few weeks.  I had watched him support another mridangam arangetram a few months ago.  He was constantly encouraging and providing non-verbal cues to the mridangist which made the whole concert go very well.  For people who were just listening and for most who were watching, it sounded like a seasoned professional was playing the mridangam.  This was mainly due to Dr. Karthick’s presence and support on the stage.  You can read more about him in the Artists page.

Ever since we moved to California in 2004, we have visited the Shiva-Vishnu temple in Livermore.  We are regular sponsors and donors for the various activities, events, poojas and construction projects at the temple.  A few years ago, the new Lakireddy Auditorium was inaugurated with a vocal concert by Vidwan Sri Sanjay Subramaniam.  We were very impressed with the sound quality and the set up at this new auditorium.  So, choosing this as the venue for my arangetram was a no-brainer.

My arangetram concert was structured to follow the typical Carnatic paddathi - it started with a varnam and ended with a tillaana, both of which were composed by the late Sri Lalgudi G. Jayaraman.  Both Anu aunty and Srikanth uncle had worked with my guru, Ravi uncle, to select the musical pieces that will bring the best out of all of us.  The songs will covered the major taalas in a range of raagas, and provided ample opportunity for me, the mridangist, to embellish and complement the musicians, along with Dr. S. Karthick.

As you can expect, the concert included several of Sri Lalgudi G. Jayaraman’s compositions and frequently played songs.  Hope you didn’t miss the short kunnakol piece at the beginning of my taniaavartanam.  Hope you enjoyed the concert.

My parents, several volunteers and a professional photographer captured memories of the event in several forms: 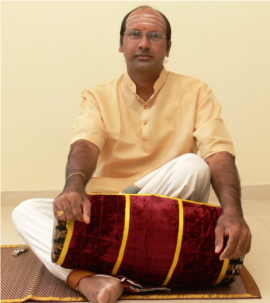 My parama guru, Vidwan Neyveli Narayanan traveled all the way from India to grace my arangetram with his presence.  He was the Chief Guest of the event.  Over the course of my nine years of learning the art of playing mridangam from my guru, Ravi uncle, Narayanan sir has conducted several workshops.  I've always walked away with tips and pearls after every workshop session.  As always, he gave me some simple yet effective pointers for my arangetram as well.  And, of course, it was special to receive his blessings at the event.

Hailing from a family of music connoisseurs at Neyveli, Narayanan was initiated into the art of mridangam playing at the young age of seven, under the guidance of Sri S. K. Ganesa Pillai.  He made his debut at the age of 11 and ever since, he has been rising in his art by furthering his horizons and making a mark in the field of carnatic music.  An intensive training under the maestro late Thanjavur Sri Upendran brought about a great amount of professionalism in Narayanan's playing.  His guru taught him the intricacies and specialties of the thanjavur style of playing on the mridangam.

Narayanan is now blessed with the rare opportunity of being one of the favorite disciples of the mridangam legend Umayalpuram Sri K.Sivaraman, who is a Padmabushan awardee.  This great influence has brought in a great amount of clarity, precision and perfection in Narayanan's style.